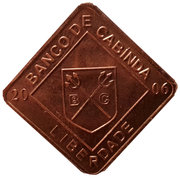 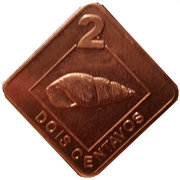 (en) The Republic of Cabinda, currently occupied by Angola, traces its claims to self-sovereignty to its initial status as a Portuguese protectorate, known as the Portuguese Congo. This protectorate had a separate history and legal status from that of the much larger Portuguese West Africa, dating to its inception on 19 September 1883 and confirmed by the Treaty of Simulambuco and the Berlin Conference in 1885. Its closest political predecessor was the iron age N'goyo kingdom, which sought voluntarily incorporation into the Portuguese Empire as a way of obtaining protection from hostile neighboring states. This coin issue was not authorized by the Cabindan Government.