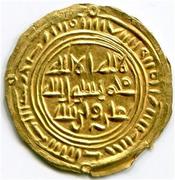 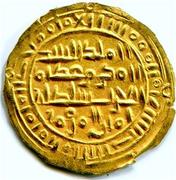 Historical detail:
The first Fatimid missionaries already appeared in Yemen in 881. Their creed was subsequently disseminated among the mounatain tribes in the early 10th century. During this period the Fatimid commander al-Fadl managed to conquer San'a and the central highlands in 905. Nevertheless, this regime was beaten by the indigenous Yufirid dynasty in 916. After this al-Fadl was murdered.
In spite of this setback the mission of the Fatimids continued. The Fatimid da'i (leader) in Yemen, Sulayman az-Zawahi, befriended a young man from the mountainous region Haraz to the south-west of San'a, Ali bin Muhammad as-Sulayhi (d. 1067 or possibly 1081). Ali was the son of a respected Sunni chief but nevertheless susceptible to the doctrines and decrees of the Fatimids. In 1046, Ali was eventually converted to the Ismaili creed and was appointed khalifa within the da'wa (dissemination of the creed). In 1047 he gathered an armed force in Haraz and thus founded the Sulayhid dynasty (1047-1138). In the following years his regime managed to subdue all of Yemen. The ruler of the Najahids in the Tihama lowland was poisoned in 1060 and his capital Zabid was taken by the Sulayhids. The first Sulayhid ruler conquered the whole of Yemen in 1062, and proceeded northwards to occupy the Hejaz. For a time, the Sulayhids appointed the Emirs of Mecca. Ali also controlled San'a since 1063, after bringing fighting against the Zaidiyyah to a successful conclusion. San'a was made the capital of his kingdom. The Ma'nids of Aden were defeated in 1062 and forced to pay tribute. Ali as-Sulayhi appointed governors in Tihama, al-Janad (close to Ta'izz) and at-Ta'kar (close to Ibb).

Ali as-Sulayhi was eventually assassinated at the hands of relatives of the Najahids whom he had previously defeated; the date is variously given as 1067 or 1081. He was succeeded on the throne by his son al-Mukarram Ahmad. The beginning of his rule is not satisfactory documented, but the area controlled by the Sulayhids was severely diminished, possibly to the San'a area. After some years, al-Mukarram Ahmad was able to rescue his mother Asma bint Shihab who had been captured by the Najahids, and the Sulayhid armies regained much territory. He could certainly not prevent the Najahids from keeping outside his power in the Tihama, but the Sulayhids nevertheless remained the most powerful regime in Yemen. In Aden the Zurayids, another Ismaili dynasty, came to power in 1083, at first as Sulayhid tributaries. The reign of al-Mukarram Ahmad ended in 1086 when he turned over governance to his wife Arwa. He may nevertheless have exerted some influence from behind during the next few years. He died in the fortress of Ashyah in 1091.