The Indian Museum in Kolkata, West Bengal, India, also referred to as the Imperial Museum at Calcutta in colonial-era texts, is the ninth oldest museum of the world, oldest museum in India and the largest museum in India. It has rare collections of antiques, armour and ornaments, fossils, skeletons, mummies and Mughal paintings. It was founded by the Asiatic Society of Bengal in Kolkata (Calcutta), India, in 1814. It is an autonomous organization under Ministry of Culture, Government of India

The Coin (Numismatic) Gallery of the Indian Museum is one of the largest and most extensive among all museums and galleries in India- and the largest amongst all Institutions of the Ministry of Culture, Government of India, with more than 52,000 public exhibits from different regions of the Indian subcontinent and range in date from c. fifth to fourth century BC to present date in the 20 showcases of the Gallery. 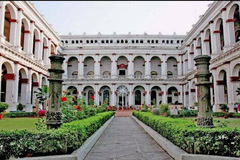 They have a wide variety of coins. Personally, I enjoyed the visit. The only thing that pinches me about the place is that the exhibits displayed for public is just a tiny fraction of their vast selection of artifacts and coins.